We are spotlighting an original Patrick Nagel Playboy Painting. This original work on board, which measures 13"x9.75", was first published in Playboy Magazine in December of 1983 in the Playboy Forum section. 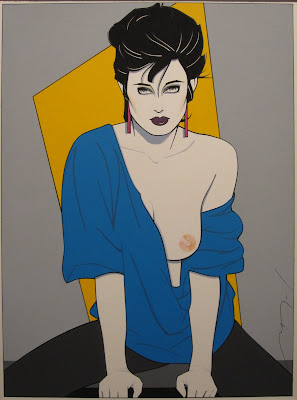 This is an exceptional example of Nagel's edgy and alluring work that he created for Playboy Magazine. The colors in the original are extraordinary with beautiful line work that can be seen in a couple of the close-up photos. 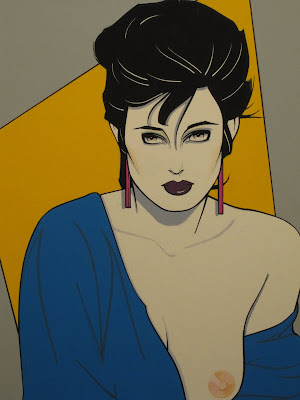 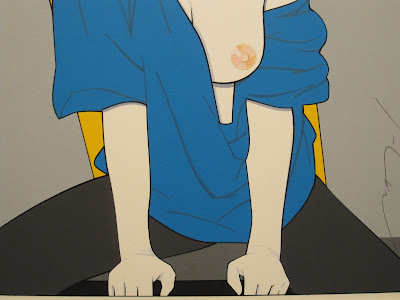 Hand signed in the lower right hand corner this original is marked on the back with Playboy's stamp, which reads "PLAYBOY'S ARTWORK REPRODUCTION PROHIBITED WITHOUT PLAYBOY'S PERMISSION." 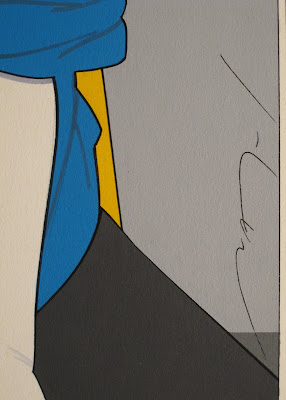 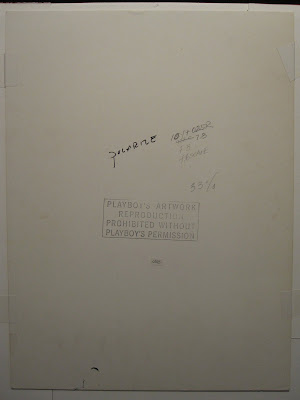 This original is in perfect condition with no signs of age. With her beautifully squared off eyes, subtle tilt of the shoulder and slight aggressive lean in towards the viewer, she projects just as much sex appeal today as the day she left Nagel's studio!

As the interest from fine art galleries grew in Patrick Nagel's original works, his painting substrate evolved from illustration board to the more traditional and accepted fine art canvas. Many of Nagel's canvas works were adapted from earlier Playboy illustrations. The altered background design elements, different color schemes and omission of nudity were the most frequent changes Nagel made from his Playboy paintings to his canvas works. In the case of "Blue Sweater" as pictured below:Most commonly referred to as "Blue Sweater", the image of the canvas was released in 1992 as an open edition lithograph measuring 24"x18". Pictured below is this poster which has become familiar to many Nagel collectors as it was mass reproduced. 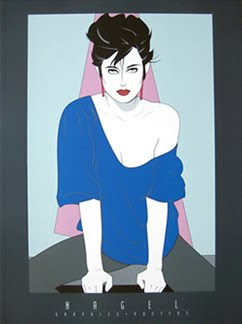 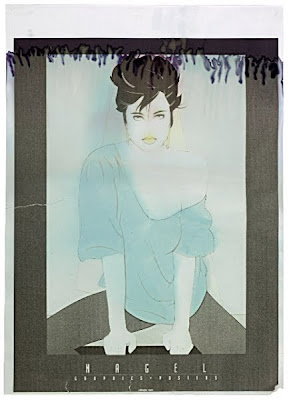 And although it has faded to some...We still Love Living in the 80s
www.the80sgallery.com
Posted by The 80's Gallery at 3:25 PM 2 comments:

We are spotlighting a very special Patrick Nagel bracelet produced by Acme Studio from 1988. 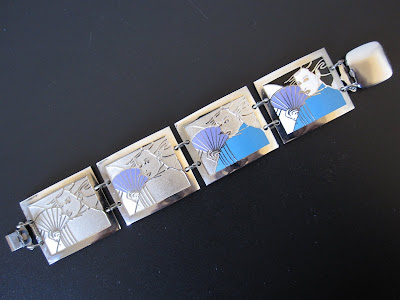 Known as "Grunwald", the imagery of this bracelet is rooted in Patrick Nagel's original piece for the promotion of An Exhibition of Serigraphs at The Grunwald Center for the Graphic Arts at UCLA in 1980. 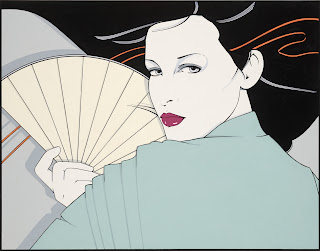 First published in March of 1980, this piece was released as a Silk Screened Serigraph Print by Mirage Editions, Inc. Measuring 25" x 17" and printed by Jeff Wasserman, the edition was limited to 250 signed and numbered prints and 1,000 signed in screen (printed signature) prints. 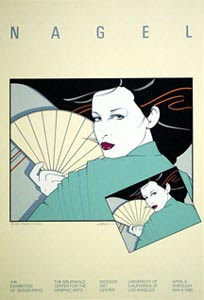 The image was then reformatted and printed as a Progressive Set in April of 1980, as depicted below. Printed as a set of four, each measuring 5 5/8" x 7", this progressive set of images showed the process of the silk screen printing and the layering of colors. 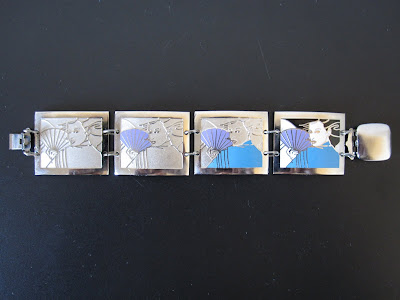 This bracelet from 1988 measures 7.25" long and is composed of 4 uniquely designed pendants, which are color progressions from left to right and each measure 1.375" x 1.125" 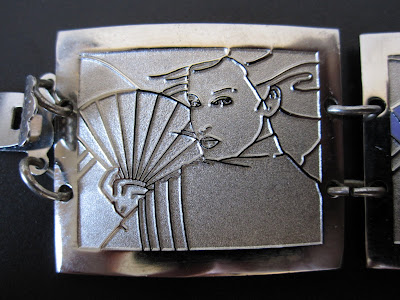 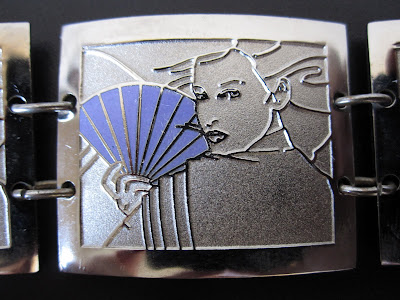 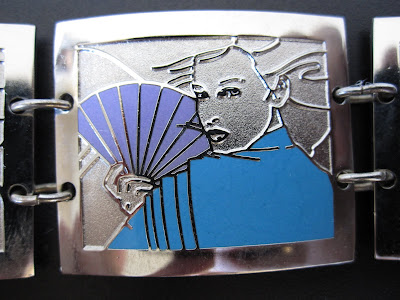 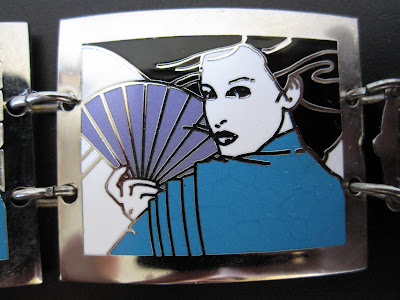 The craftsmanship and attention to detail in this bracelet make it an outstanding piece of art and jewelry. 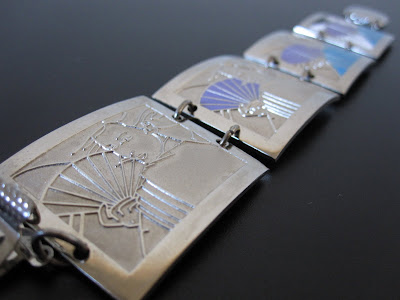 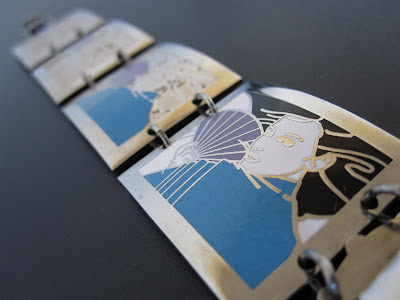 The back of each pendant is marked with the 1983 Dumas Inc Nagel Trade Mark and the Acme Studios stamp. 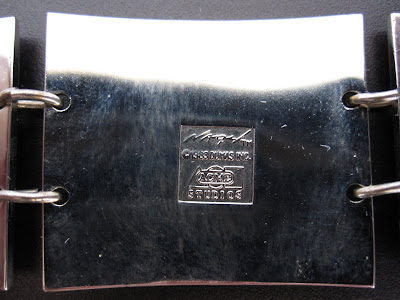 This bracelet is accompanied by a Certificate Card from the Nagel Estate and Acme Studio, which identifies this piece as number 55 of 1,000 produced. This bracelet is currently being showcased and offered for sale for $295. 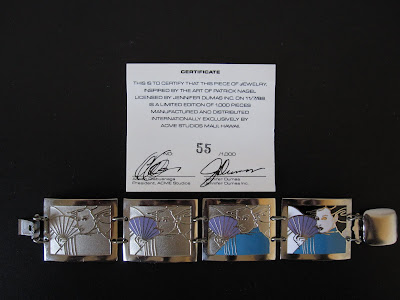 Love Living in the 80s
www.the80sgallery.com

Atlantis is Calling...S.O.S. for Love and Gregory Gioiosa

In this post we are spot-lighting two very special pieces from a series of work by artist Gregory Gioiosa.

In the late 1980's Gregory Gioiosa was the artist in residence at The Fresno Art Center and Museum. In 1989 Gregory created an installation in the main gallery of the Museum with a series of work titled "Atlantis is Calling." His asymmetric designs, bright day glow colors, overlapping line work, and brushed metal accents is a bold combination for an individual piece, but when shown together the consistent aesthetics of the series is truly stunning. Pictured below are images that compare the details of the two originals from this series that we're showcasing.

As was befitting with many of his ethereal inspirations, Gioiosa was intrigued by the mythology of the city of Atlantis and it's association with the Pleiades star constellation. In Plato's myth of Atlantis, the island city originated with Poseidon, the Greek god of water. The free flowing brushed metal that is seen in the two images above brings to mind the continual connection between Atlantis and the sea. According to the myth, Atlantis was the most beautiful island in the world, and it's people were the most advanced civilization with unparalleled technologies and modern architecture. The people of Atlantis built engineering feats including aqueducts, roadways and bridges. Gioiosa based the series of work on concentric circles, overlapping grid work and various other structural elements that were representative of the advanced Atlantean architecture. Pictured below are detail images that show Gioiosa's use of circles and patterning throughout both pieces.

After the Museum showcase of this series, Gregory Gioiosa entered Graduate school at the University of California Irvine. While earning his Masters of Fine Arts Degree at UCI, Gregory built upon the wall relief motif from his Atlantis series for the following 2 years. The wall relief work was very successful for Gioiosa and an important part of establishing a collector basis for his work in Southern California. As Gregory Gioiosa has continued to be showcased in galleries throughout the United States, his work has been collected internationally and is included in the permanent collections of several museums.